This article forms part of our Powering People and Change Project.

Taking a deeper look into the fashion and textile industry quickly unearths a story of horrifying waste and destruction of the natural world. But increasingly, consumers are beginning to ask questions of the big players and are instead searching out those who are taking a more considered path, moving away from the cheap and replaceable towards something built to stand the test of time whilst being far kinder towards the planet.

This month we sat down with the founder of the wonderful Baxley Goods, Lyndsay Lucero, to discuss the challenges of sourcing and manufacturing products in the UK, trying to change people’s buying habits and taking the better way, even if it’s the harder way.

We’re already massive fan of your bags Lyndsay, but for those folk new to the brand could you tell us a little more about Baxley? And where the name comes from?

Of course, the name is actually quite a simple answer – it’s an amalgamation of my kids names. I actually had a different name picked out originally but it quite quickly became apparent we might have some trademark issues on the horizon so we changed it before the launch.

There were so many motivations surrounding setting up Baxley but they were all stemming from the same concerns really – it was just after I had my second child and we seemed to be under a constant bombardment of terrifying news alerts, from Trump being elected and stripping back years of environmental policy to the natural disasters reminding us that the clock really is ticking with regards to climate change. I remember thinking, oh god – I’ve just brought two children into the world. So actually, naming the company after my kids just seemed to work.

I think that sort of motivation resonates with a lot of people. Did you feel driven to make these changes yourself because you couldn’t find a brand already doing it?

I definitely felt frustrated that despite wanting to take active steps to have a positive impact the only options that seemed available on a personal level were to recyclable more and maybe fly less. And whilst there is an irony in tackling that problem by producing more physical things, it allows me the platform and opportunity to raise awareness around these issues in a way I feel I was never able to achieve in my previous life as a designer. Baxley is all about creating the best products possible with the smallest footprint but it is also about raising peoples awareness around some of the issues in the way the mainstream currently manufactures and offering a viable alternative.

How did you end up deciding on making backpacks?

That’s a funny one – I love bags, who doesn’t love bags? In my previous line of work as a designer I was one of the 15% of the workforce that was a woman and it seemed very apparent to me that we designed experiences with men in mind – go back only eight years ago when backpacks became more popular and you have to assume most of them were designed by men as none of the them catered for things women carry that men maybe don’t.

So I was already in the market for a nice bag that had been designed with both genders in mind, and at the time I was looking for a job after taking some time off after having my little boy. I had an interview with a company in Seattle lined up and as I was doing my research on redesigning their website I stumbled across this rolltop bag that I was so excited about! I came really close to purchasing it but the more I looked into it the more I realised a couple of things about it weren’t quite right – it seemed a little too traditionally ‘outdoorsy’ for the urban environment I worked and lived in and it didn’t really offer the functionality I was looking for. That was probably the light bulb moment, here’s something I can do that ticks so many different boxes to get me excited – user ability for both genders, making things, sourcing materials. 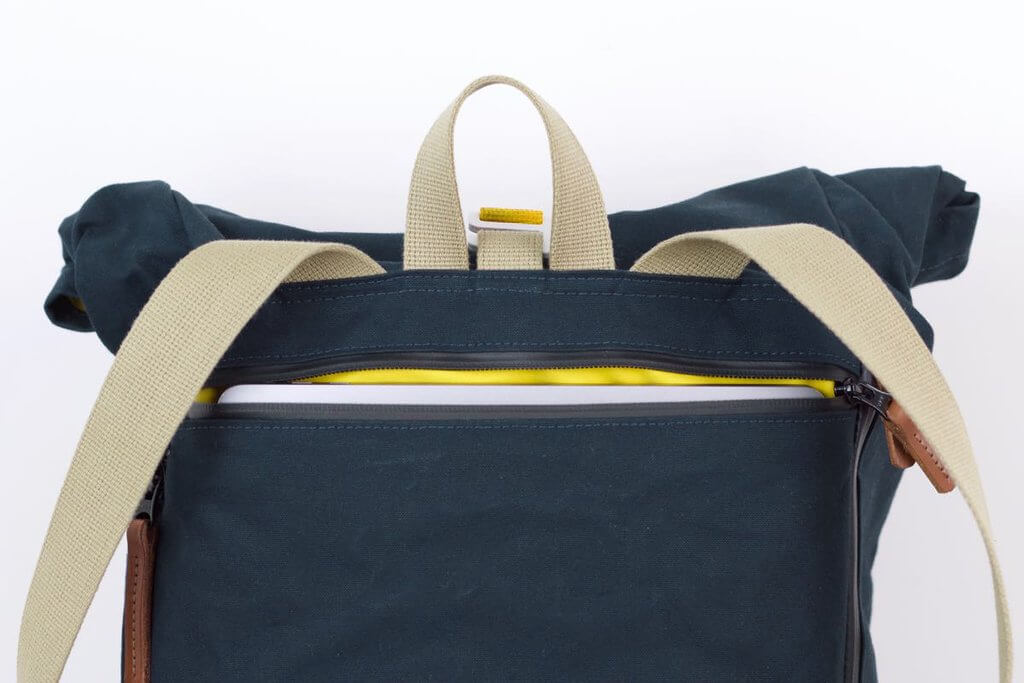 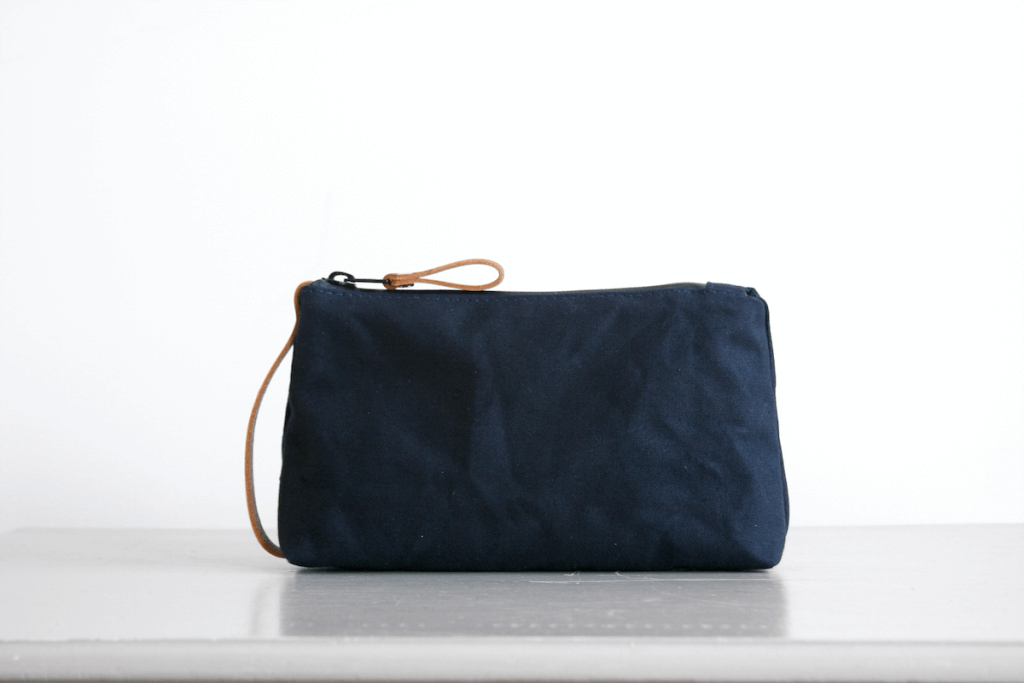 So was sustainability always a core part of that vision?

Very much so. At the start I did all the prototypes for the bags myself, cutting out large pieces of material, stitching and sewing and figuring it out as I went along – they took me 3 months per prototype! But when I needed to start having the bags produced by other people I went to an innovation company who helped me start to understand materials better and what would be possible when trying to source textiles responsibly and with as little environmental impact as possible. Once we had the materials selected it was suggested that we ship the British canvas to factories in China to be made and then sent back to us in the UK to be sold. We were told this is simply how companies could make the most money and how the industry works.

That totally floored me and made my resolve even stronger to make sure the manufacturing was all done in the UK. So we went down a path of trial and error finding the right manufacturing company based here in the UK and finally stumbled across this small company not far from where I live in Hove near Brighton and that’s who we now use to manufacture all of our products.

And how about material sourcing? Have you been able to find UK producers for all the materials needed for the bags?

This is still a struggle but it is something that really excites me. In the last run of bags we had 21 different component parts for each bag, from different coloured threads for the stitching to the rivets and zippers. Whilst it’s not currently possible to source all the materials from the UK (we simply don’t produce them anymore) I do try with each version of the bag to source more and more of the materials from suppliers closer to home. So right now, the material that we use the most of without question is the canvas – that comes from a mill up in Dundee in Scotland. Not only are they more local but they all ensure all their fabric is produced from organic materials which is GOTS certified and Fluorocarbon (FCF) free.

So, Fluorocarbons are very, very common and they are the easiest chemical to use to make materials water resistant or water proof. They are incredibly effective at keeping things water proof but they are a disaster environmentally speaking – they’re six times more potent to the environment than CO2 and incredibly difficult to breakdown (one statistic estimates their durability at around 50,000 years). The treatment used at the mill in Scotland is still highly effective but is much kinder to the planet. 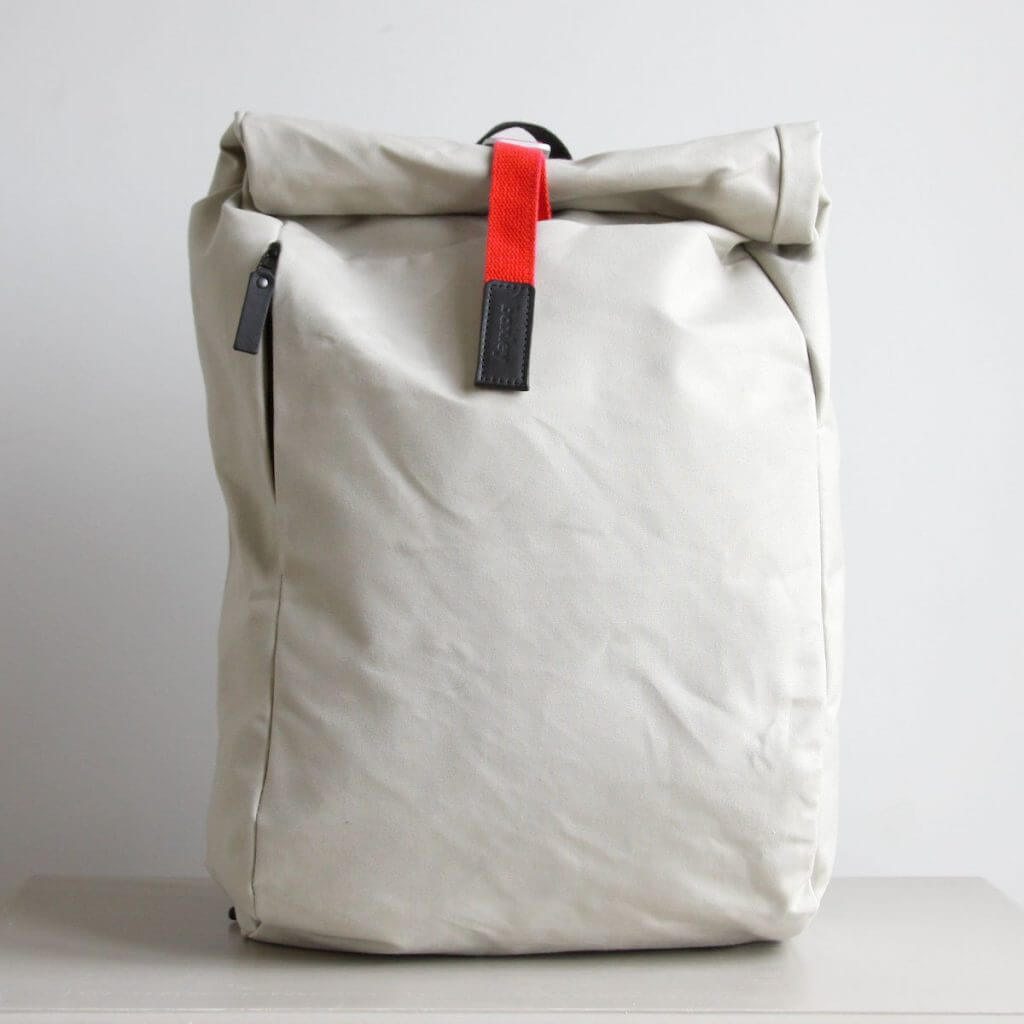 You only do limited, pre-order runs of each version of the bag – is this an environmental decision?

We do also have a permanent collection of totes and little pouches but again we only make these in small batches so that we can replenish them only when there is demand.

But yes, all the rolltops are released as a limited run through a pre-order model, partly to limit any waste as we know that all our bags already have a home to go to, but also because producing in smaller numbers allows you to really take your time over the craft of producing something that is durable and will stand the test of time. We have never once gotten rid of a bag because of a manufacturing issue – we can simply take the time to fix it up and make sure it’s perfect before being sent out to the customer.

This approach also allows us to be more responsive towards new technology and techniques, choosing new materials that are better for the environment when they become available rather than having to use up large quantities of materials we are already committed to.

What do you think the biggest challenges are in cleaning up the fashion and textile industries?

There are definitely things we can all be doing as individuals but what we also need is change on a much larger scale, which is politically. Having companies held responsible for recycling and disposing of their own materials in a proper way across the entire life cycle of their product would be a very big first step and would definitely change the way they view and approach the materials they use. In the meanwhile, we need a more fundamental shift in our mentalities towards the things we buy – buying less but better, treasuring and taking care of the items we own and repairing instead of replacing.

You can find out more about Baxley and pre-order a backpack here.

Or you can read previous editions of the Powering People & Change Project here.